My Body Plans For 2014: March and April, plus Status Report 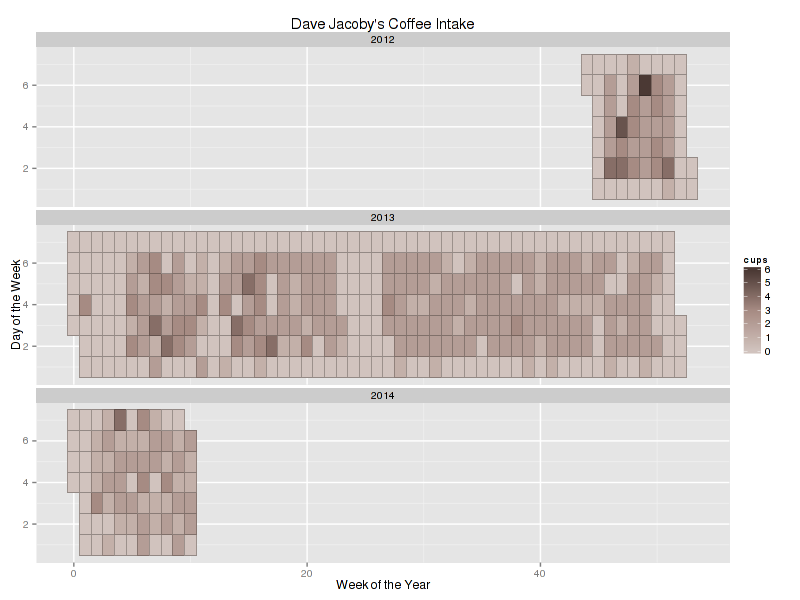 The darker, the more cups recorded. I drank coffee on weekends. I often had more than 1 cup. I sometimes had more than two cups. I didn't drink it late, but I drank more of it. I consider this sort of a fail.

Weights: In February, I participated in a month-long triathlon. I rode lots of bike. I swam miles like it ain't no thang. I did not lift much. So, right now, I'm struggling to throw around the 20lb dumbbells, much less throw more reps of the 25lb dumbbells. But I did get the t-shirt.

Feet: I've started to wear my inserts again. I haven't developed a the series of range-of-motion exercises, much less committed to doing them daily. I have been walking a lot, which means I've been getting the activity without so much the stomping on my ankles.

Tools: I wrote a tool, more working against MongoDB than anything else, that checks and stores my steps per day from FitBit, and tell me if I haven't been taking more than 100 steps per hour.

Weight: I have made a new all-time-low weight, 208 lbs, but that was when I was out sick. Otherwise, I'm seeing a winter-month plateau. So, while I am not where I want to be, and see more jiggle than I want to see, I am not depressed about my progress.

Endurance: By the rules of the month-long triathlon, all steps counted and I knew that, by my normal walking, I could easily handle the distance. I have been doing other endurance exercises, but I haven't been doing anything to push myself in walking into running.

I think I have been consistent with my goals but not so much my plans. I think I haven't been doing it as good as I could, but I've been OK.

In part, I think I don't push myself nearly enough when I'm walking, so I'm starting back to the treadmill, and while the action will continue to be "walk on the treadmill until I hit my 10,000 steps" when I show up, I'll start trying to push the speed and elevation to keep my heart rate raised.

I have a pointer to a weather API to make the "Bike Today, Dag-nabbit!" tool.

Link
Email ThisBlogThis!Share to TwitterShare to FacebookShare to Pinterest
Labels: quantified self

It started out with wanting to take in mass quantities of "ruin my day". I wrote a program that would traverse a directory tree and run Perl::Critic on everything with pl and pm suffixes. This would bring out all the depression in all the code I've written in the last five years.

It got to ~/bin/TESTING and crashed. This the program it crashed on:


Slight, isn't it. You wouldn't figure it out at first.

$π. This code works; you can have Unicode characters in variable names in Perl.

I have reported this bug to Perl::Critic. I don't expect them to be able to fix it, because it isn't in their code.

I have also reported this bug to PPI. Making everything Unicode-safe will be difficult, but considering how so many billions of people don't use languages based on the Roman alphabet, allowing them to write code in as much of their language as possible is a good thing. I can also imagine mathematicians liking $π instead of $pi, $θ instead of $theta, and so on, but the world population of mathematician programmers is smaller than the world population of non-western-european-language-speaking programmers, to be sure.

ETA: It is being fixed.

I don't really know how to make Perl code Unicode-safe, but I might pull down the source to PPI::Token::Word and figure it out.
Posted by Dave Jacob at 1:11:00 PM 0 Counter-Rants