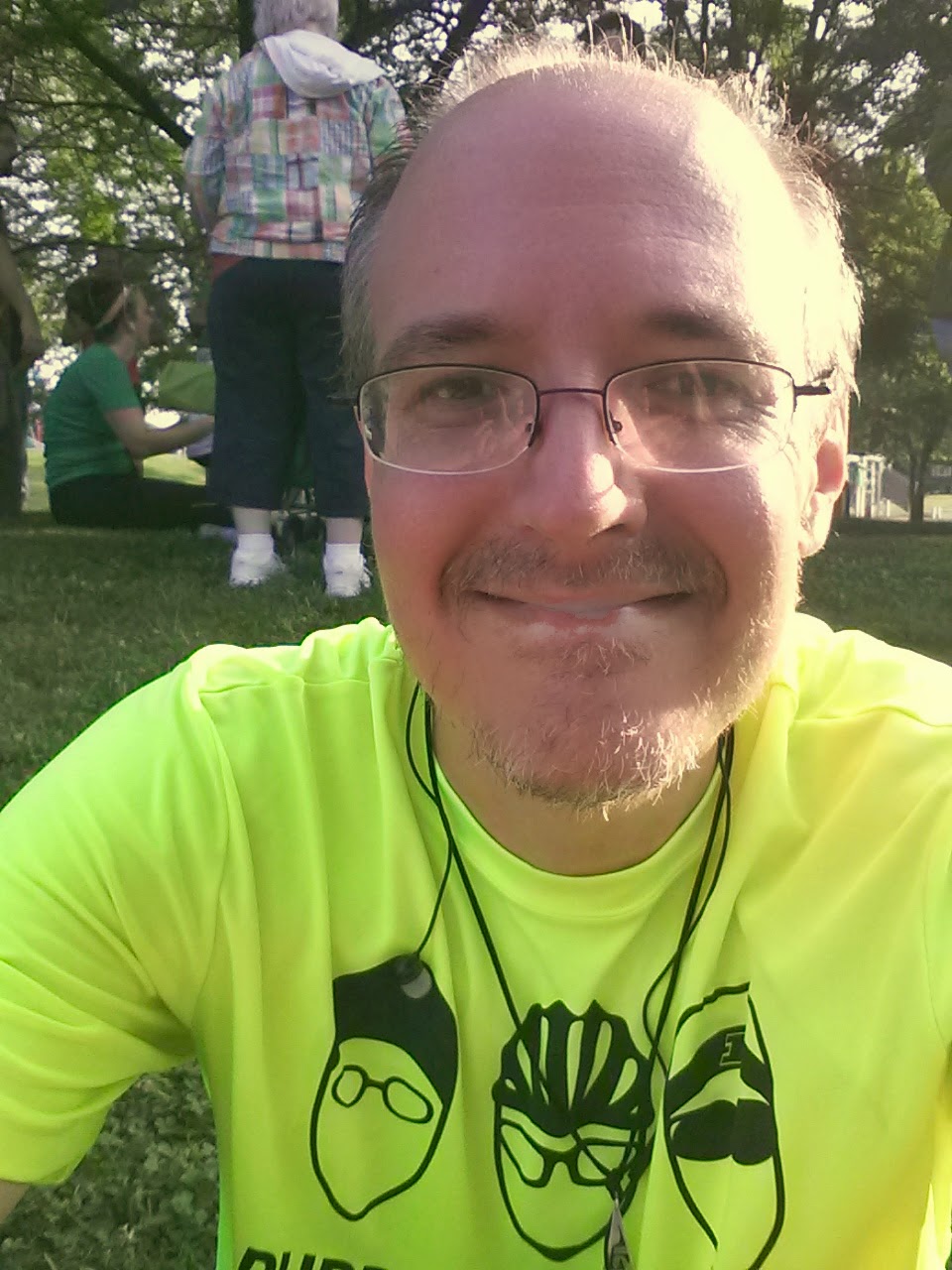 Just because I haven't been writing about my goals doesn't mean I've forgotten them. In fact, a week ago, I participated in Zoo Run Run, a 5K around Columbian Park to benefit the Columbian Park Zoo, and my time was 34:12, which put me well past my goal for Endurance. My next goal is to come in less than 30 minutes, but I think I'll leave that for next year, rather than sign up for more races this year.

I have started working with the cable setup at the Co-Rec to move toward my goal of one pull-up. I was able to pull about 60 lbs, which is good. I don't really know the next step, but I'm happy with that and will work on a plan for pull-ups.

For the longest time, my personal record on the FitBit was the Independence Day Celebration where I was a volunteer and on my feet all day, exhausting myself but hitting 18K or so steps. Related but separate, I had identified when running that my legs weren't tired, my feet weren't bad, but I was huffing and puffing like a big bad wolf. I've since started to focus on breathing, and I put in a 20K step day on June 20th with the main difference being deep diaphramatic breathing. I haven't hit that PR since, but I have been more consistently hitting the 10K goal. I'm still not hitting it every day -- I wimp out on weekends -- but I've hit 10K at least one day a week every week except one I took as a vacation week.

I've been trying to put HIIT into my runs. Dale Asberry suggested it in my goal-planning post and it is valid. I guess I see it as a level thing, in that if a person can't jog for 10 minutes, that person would be unwilling and unable to alternate sprints and rests for 4 minutes. I, as my okay-ish 5K time shows, am at a point where I should start doing something like Tabata sprints, which I have tried to start. It went well a few times before the 5K, but since, I haven't been able to really engage. Well, last time, I walked and breathed through 2 of 8 20-second sprint times, which 1) is more than I had the time before, and 2) is less than I wanted.

For weight, I hit 202 lbs recently, but was 206 when I weighed this morning. I'm a little discouraged by the recent jump up, and I think this means I have other habits to engage, but I'm liking this neighborhood and feeling good about it.

I plan to generate a plan to engage my remaining fitness goals
Posted by Dave Jacob at 12:55:00 AM 0 Counter-Rants

Link
Email ThisBlogThis!Share to TwitterShare to FacebookShare to Pinterest
Labels: fitbit, quantified self 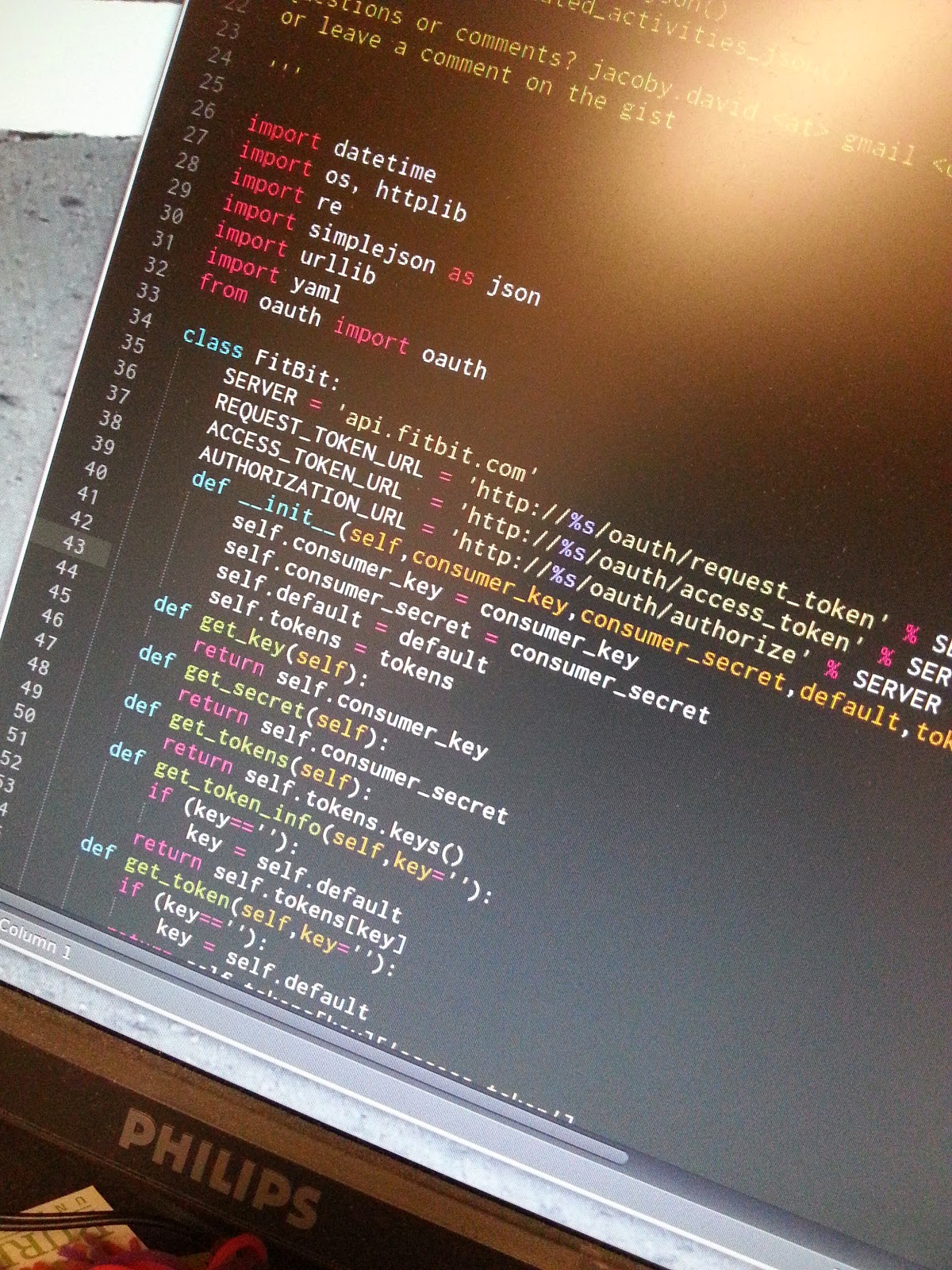 And I found that "Alertness Tracker" is the name I put for my "app", by which I mean the connected series of programs I collect as fitbit_tools, which is the topic of the talk I'll be giving in a week and a half.

The first thing is, anybody could name a thing "Alertness Tracker". The specific thing that caused me to develop fitbit_tools is a point where I wore my FitBit Ultra every day for several weeks without noticing I hadn't charged it recently and it was a dead dead thing. Once I had enough to tell me if it hasn't synced in a few days, I knew enough to have it tell me if the battery level was anything but high. I wrote it in Python because I couldn't find any code (besides the Net::Twitter module) that really handled oAuth in Perl, but I did find the code in Python. After that, I decided that I'd like to know more about my trends than the FitBit dashboard can tell me, then put it out on GitHub, but since I had the App registered with FitBit, I stayed with it.

This is the main thing I want to hit. The secondary point is "Don't wallop things without checking", but the main point is that you have a style, and you should go with that style. Stay within the conventions of your project and team, of course, but you should be able to recognize yours as yours. In the lab, Rick and I are both Perl programmers, but our styles are very different, so we can open up libraries and look at subroutines and say "Hey, I don't know when I wrote that, or why I wrote that, or what stupid thing I was thinking when I wrote that, but I certainly know that I wrote that."

I recall, I faked the registration using FitBit's tools rather than writing a "get client tokens" oAuth script. I think I put that in the "I really should do that" category and forgot it there. Now, as I'm going to talk through it, and as I just re-experienced the issue, I have explained it in the README and have received a "round tuit", and so will have to write something up.
Posted by Dave Jacob at 11:10:00 AM 0 Counter-Rants

Question about versioning with Perl modules

My main two languages are Perl and Javascript, and I've been coding them here for several years. This means that I have a body of code I'm perpetually updating and maintaining old code. And, while I am shamed to admit this, I test in production, I dev in production, and until we change our infrastructure, I don't see that changing any time soon.


In Javascript, there is a capability that I've found I like.

This means if I want to play around with rewriting bulldata, I can copy and poke at bulldada-0.0.2.js, and change the script tag to call for 0.0.2 when I'm happy with it. This means I am developing with the production server, but not necessarily with production tools. This makes me happy.


Let's think about Perl. In my programs, I can specify a version:

In my modules, I can set that version:

Question is, how to have multiple modules with the same name in the same directory structure? By testing with Perl 5.18, I know that you can't have BullDada_0.1.pm and BullDada_0.2.pm, both starting with package Bulldada, and expect it to work. It seems that if I wanted to keep programs from using BullDada.pm with $VERSION = 0.01, I could specify BullDada 0.02, but I could also delete the old version and never use versioning at all.