If anyone has a solution, please tell me.

I have some tasks. The one that's almost off my front burner is a conversion job. There's a gob of files that exist in the worst possible XML format, which is there's one entry in the XML, which is a huge compressed BLOB (binary large object) of unknown format. The files have a name that say what kind of job created it and what day, but if you don't know which project went through which day, it gives you no help. We can export as (a more real) XML, which gives us the sample information we need. Thing is, there are over 1500 samples to be converted, which really cannot be a by-hand operation.

So, I'm working with Sikuli again, this time on Windows not Ubuntu. I've done the best I can, but this is a program written in Jython (a Java [not my favorite] implementation of Python[not my favorite]) running in Sikuli (taking over the keyboard and mouse) going over Samba to grab the configuration and data files, running in 32-bit Windows 7 on a VirtualBox instance. There's lots and lots of not-necessarily-stable involved here, which means I have to keep checking on it to ensure it keeps running. Which means, while it is going, I can't really throw my mind at any task that really takes my attention, which, basically, means any task I need to do at work, which makes me feel terribly unproductive, even as I know that it's much more productive than if I was doing all that crud by hand.

So, until I can code up a way that's much more repeatable and stable, or at least until I get well past the 10% completion this project is at about now, I can't really focus elsewhere.
Posted by Dave Jacob at 1:00:00 PM 0 Counter-Rants

We Solved It! Return of the PAL Problem

But Android is not. Which is annoying.

I have of course went to the helpdesk, and that's where it gets a bit interesting. There's two groups I've hit: the helpdesk, who have found this problem across different Android versions, across different carriers, different handset manufacturers, without finding any common indicator, and the networking group, who, without more to go on, have entered the go away kid, you bother me zone, considering it a failure in user configuration.

I feel I should point out that, for the most part, my co-worker Rick keeps his Android phone all but off when he's in the office. I, on the other hand, tend to hook my phone into my Greater Audio System (Windows and another 1/8" cable [either laptop or phone, depending] run into a y-cable plugged into the audio-in of my Linux box, which I config to go direct to the audio out, because I don't have a mixer, and then into a speaker and to my headphones) so I can get my phone's notification beeps and podcasts along with the other audio I have at work. So I use the network and feel it when it isn't available. So, while I was pushed by usage, for Rick it was a question of curiosity. Which seems to be enough.

When you think about networking, if you think about networking, you probably think about your IP address akin to a phone number, which kinda works and kinda doesn't. Assume we have an address of 8.8.8.8 (which I don't: that's the IP address of Google's open DNS server, which I kinda like). I can directly connect to any machine on my subnet, which could easily be 8.8.8.7 and 8.8.8.15 or further out, and if I can't find what I want on my local network, the traffic goes out the gateway to the hierarchically higher network. (There can also be down, in addition to up, but that's not important right now.)

The subnet mask sent out by DHCP was 255.255.240.0. iOS and Windows are just peachy with that. Rick noticed that the IP addresses were a little higher than he would expect. He suggested that we enter in static IP addresses based upon what we got via DHCP (using a tool like ifconfig to tell you it all) but with 224 as the third octet, and it worked like a charm. Go us!
Posted by Dave Jacob at 12:48:00 AM 0 Counter-Rants

Purdue has a wireless network, called Purdue Air Link, or PAL2.0. In essence, you log on to the wireless the same way you'd log onto most other university computing equipment.

It works fine on my co-workers' iProducts.

It works fine on my laptop.

In most places, it works fine for me. And not just "at my home". Other places on campus, other places with PAL2.0.

But not in my office. In my office, I can connect -- phone says I have connection to network, phone says I have an IP address -- but cannot do anything with them. And the tools I would normally try to use to get a better idea of what's going on, such as ping, nslookup, traceroute and the like, are not on my phone. (Maybe I need to look into those.)

And, I should say, it affects my co-worker's Android phone, too.

I don't understand an issue that only occurs with Android phones, but it seems I have one. I think I'm getting an IP address, but I can't route.
Posted by Dave Jacob at 4:36:00 PM 0 Counter-Rants

I program, and for most small jobs, and for most complex find/replace jobs, I prefer vi. I have tried EMACS, but I never really got it. But I've hit a point that, when I'm doing most of my coding, I prefer an editor that behaves a bit more like a word processor. I want a graphical editor. I have tried a few. The one I use these days is Komodo Edit from Activestate, which I use some on Windows but primarily on Unix.

I develop and maintain a few web apps for the lab, and that's everything from SQL to Perl libraries to Perl applications to HTML to Javascript. I'm often wanting to make sure that the page I'm writing is working right with the AJAX Javascript code I'm writing for it, which is connecting to the CGI Perl code I'm writing, and that it is working correctly with the modules. Since they're at the far ends of the user experience, the Perl module and the HTML are tabs in one editor window, with the client-side Javascript in an other window and the server side Perl in another. Both my journalism school page layout background and my history with 80x24 terminals has lead me to believe that you don't want to go too wide, so I try to keep my code within 75 to 80 characters per line. My main monitor is 1680x1050, and I can have my code at a readable font size and still have three editor windows in one monitor, leaving my other for terminals (I have four to six open post of the time) and my Windows monitor open to a web browser.

This means that I CANNOT have three open and not partially-hidden editor windows on one screen. This used to be no problem for Komodo Edit, and is a deal-breaker for me.

So, what other mature modern graphical text editors for Linux are out there?
Posted by Dave Jacob at 10:31:00 AM 6 Counter-Rants

Who is Dennis Ritchie and Why should I care? 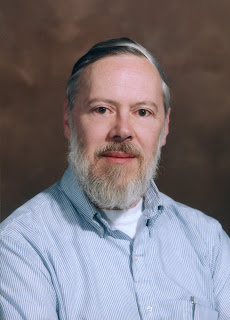 You can check Wikipedia for the fuller explanation, but here's the summary: He was a researcher at Bell Labs. While he was there, he worked on the Multics system, and as an offshoot, created the C language and the Unix operating system. The C language was not tightly tied to the specific system it came from, which meant that things written in it could reasonably be ported from one set of hardware to another.

He, Ken Thompson and Brian Kernighan are among the set of people whose creations made modern computation possible. I throw into that list Bob Metcalfe (ethernet) and Douglas Engelbart (windowing systems and the mouse). Others came along after and made things better, smaller, faster, more integrated and more beautiful, which is all very important, but Ritchie is among those who made things possible. He will be missed.

Open Computing, Taken To The Next Level

This is the Doma Pro PCI, a black acrylic "case" for a computer. I say "case" because, while there are enclosures for the optical and hard drive, it's not really a case because it doesn't close. All your electronic bits are open to the world.

Which is neat, if you're in an environment where keeping your computer open to the elements is acceptable I wouldn't try this with young children.

During college, friend-of-the-blog Patrick had a working computer stuck to his bulletin board. The power supply sat on a nearby shelf, I think, but otherwise, it all hung off the wall.

I'd be curious about RF interference in the surounding area, but this looks like a neat thing.
Posted by Dave Jacob at 1:50:00 AM 2 Counter-Rants

boom is a key-value store, running on the command line and written in ruby. I don't know whether I need a key-value store for my command line, but I remember when I didn't know if I needed a laptop, bash, Linux, VirtualBox, an RSS aggregator, and so many other things. So, I thought I'd try it. And, I of course decided to try it first on the machine I command line the most, my work machine, which runs Ubuntu 10.04, the long-term support version.


I followed this up by downloading and building ruby and trying to do a gem install from that. Into my second day, I decided that spending more of my precious time trying to get it working on Ubuntu was a waste. So I briefly considered reimplementing it in perl, then found ruby for Windows and installed it on my Win7 box. Then I opened a term and did the gem install. And now it works.

I find this profoundly disappointing.

I don't think this is the fault of Zach Holman, the creator of boom. I have now tried boom on Windows and kinda like it. I suspect (and might pop open VirtualBox and a bleeding-edge distro to check) that the problem is that Ubuntu or just U10.04 is stuck with an ancient RubyGems the way that RHEL is stuck with ancient Perl. I just know that I don't believe it should've been a problem.
Posted by Dave Jacob at 9:47:00 AM 2 Counter-Rants

I have headphones at work, which I use for the express purpose of filtering out the sounds of my coworkers, and the sound of them talking to each other is distracting enough. Voice control makes all the sense in a car, but on a tablet?
Posted by Dave Jacob at 1:17:00 PM 0 Counter-Rants

Link
Email ThisBlogThis!Share to TwitterShare to FacebookShare to Pinterest
Labels: we live in the future

We use the jQuery module tablesorter to allow for the dynamic sorting of our tables, and I have just now run into a bug.

We have 3 second-generation sequencers: the 454, the SOLiD, and the HiScan. We have a second-generation sequence table, which mingles all three. And sorting on sequence agent is broken, because it trys to look at the column numerically when clearly, it needs to treat them all as character strings. Which will monopolize my next few hours.
Posted by Dave Jacob at 9:41:00 AM 0 Counter-Rants