Graphs are not that Scary! 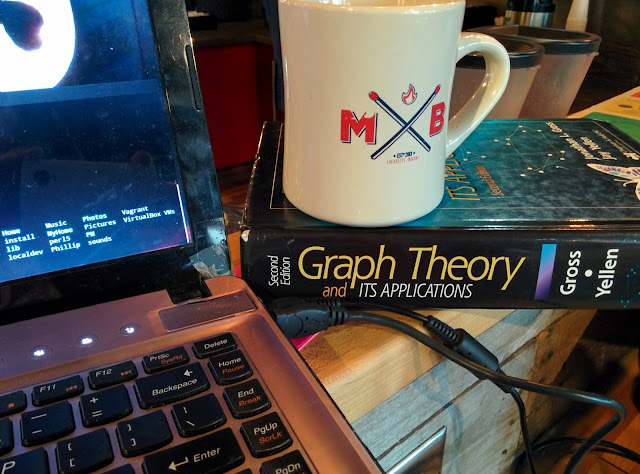 I can begin to break things up myself, but curation is a hard thing, so I wanted to do it automatically. And I spent a long time not knowing what to do. I imagined myself traversing trees in what looks like linked lists reimagined by Cthulhu, and that doesn't sound like much fun at all.

Eventually, I decided to search on "graphs and Perl". Of course, I probably should've done it earlier, but oh well. I found Graph. I had used GD::Graph before, which is a plotting library. (There has to be some index of how overloaded words are.) And once I installed it, I figured it out: As a programmer, all you're dealing with are arrays and hashes. Nothing scary.


We'll take a problem invented by Lewis Carroll called a "word ladder", where you find your way from one word (for example, "cold") to another ("warm") by changing one letter at a time:

Clearly, this can and is often done by hand, but if you're looking to automate it, there are three basic problems: what are the available words, how do you determine when words are one change away, and how do you do this to get the provable shortest path?

First, I went to CERIAS years ago and downloaded word lists. Computer security researchers use them because real words are bad passwords, so, lists of real words can be used to create rainbow tables and the like. My lists are years old, so there may be new words I don't account for, but unlike Lewis Carroll, I can get from APE to MAN in five words, not six.

Not sure that Lewis Carroll would've accepted AAS, but there you go

There is a term for the number of changes it takes to go from one word to another, and it's called the Levenshtein Distance. I first learned about this from perlbrew, which is how, if you type "perlbrew isntall", it guesses that you meant to type "perlbrew install". It's hardcoded there because perlbrew can't assume you have anything but perl and core modules. I use the function from perlbrew instead of Text::Levenshtein but it is a module worth looking into.

And the final answer is "Put it into a graph and use Dijkstra's Algorithm!"

Perhaps not with the exclamation point.


Here's making a graph of it:


Following are what my wordlists can do. Something tells me that, when we get to 16-letter words, it's more a bunch of disconnected nodes than a graph.

My solver isn't perfect, and the first thing I'd want to add is ensuring that both the starting and ending words are actually in the word list. Without that, your code goes on forever.

So, I won't show off the whole program below, but it does use Storable, Graph and feature qw{say}.


I return lots of stuff, but the part really necessary is %prev, because that, $source and $target are everything you need. Assuming we're trying to go from FOR to FAR, a number of words will satisfy $prev{FOR}, but it's the one we're wanting. In the expanded case of FOO to BAR, $prev->{BAR} = 'FAR', $prev->{FAR} is 'FOR', and $prev->{FOR} is 'FOO'.

And nothing in there is complex. It's all really hashes or arrays or values. Nothing a programmer should have any problem with.

CPAN has a number of other modules of use: Graph::Dijkstra has that algorithm already written, and Graph::D3 allows you to create a graph in such a way that you can use it in D3.js. Plus, there are a number of modules in Algorithm::* that do good and useful things. So go in, start playing with it. It's deep, there are weeds, but it isn't scary.
Posted by Dave Jacob at 2:32:00 PM 0 Counter-Rants

Modern Perl but not Modern::Perl

This started while driving to work. If I get mail from coworkers, I get Pushover notifications, and halfway from home, I got a bunch of notifications.

We don't know the cause of the issue, but I do know the result

We have env set on our web server set so that Perl is /our/own/private/bin/perl and not /usr/bin/perl, because this runs in a highly-networked and highly-clustered environment, mostly RedHat 6.8 and with 5.10.1 as system perl, if we want to have a consistent version and consistent modules, we need our own. This allows us to have #!/usr/bin/env perl as our shbang.

And this morning, for reasons I don't know, it stopped working. Whatever perl was being called, it wasn't /our/own/private/bin/perl. And this broke things.

One of the things that broke is this: Whatever perl is /usr/bin/env perl, it doesn't have Modern::Perl.

I'm for Modern Perl. My personal take is that chromatic and Modern Perl kept Perl alive in with Perl 5 while Larry Wall and the other language developers worked on Perl 6. Thus, I am grateful that it exists. But, while I was playing with it, I found a problem: Modern::Perl is not in Core, so you cannot rely on it being there, so a script might be running with a version greater than 5.8.8 and be able to give you everything you need, which to me is normally use strict, use warnings and use feature qw{say}, but if you're asking for Modern::Perl for it, it fails, and because you don't know which Modern thing you want, you don't know how to fix it.

This is part of my persistent hatred of magic. If it works and you don't understand how, you can't fix it if it stops working. I got to the heavy magic parts of Ruby and Rails and that, as well as "Life Happens", are why I stopped playing with it. And, I think, this is a contributing factor with this morning's brokenness.
Posted by Dave Jacob at 10:54:00 AM 0 Counter-Rants