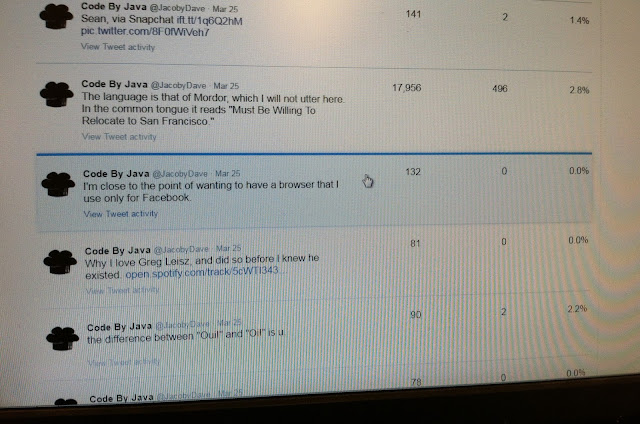 The first line between Twitter Use and Twitter Obsession is TweetDeck. That's when the update-on-demand single-thread of the web page gives way to multiple constantly-updated streams of the stream-of-consciousness ramblings of the Internet.

The second line between Twitter use and Twitter obsession is when you want to automate the work. If you're an R person, that's twitteR. If you work in Python, that's tweepy.

And, if you're like me, and you normally use Perl, we're talking Net::Twitter.

What follows is the simplest possible Net::Twitter program.


Again, this is as simple as we can reasonably do, without pulling the keys into a separate file, which I, again, strongly recommend you do. (I personally use YAML as the way I store and restore data such as access tokens and consumer keys. I will demonstrate that in a later post.)
Posted by Dave Jacob at 6:22:00 PM