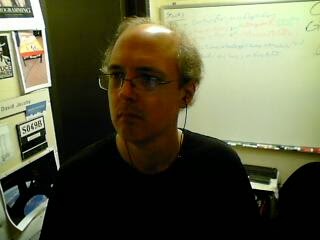 I've been working on my resume recently. No reason, really. (If you have questions, ask elsewhere. I'm fairly easy to find.) A recent response to my resume tells me it sucks at telling the story of me. Not too surprised; the form sucked before, and has become the gameboard for competative Reverse Buzzword Bingo, where if you find the right combination, you get the job, which makes it counterproductive to even try to tell your narrative.

So, this is the story of me:

My first degree was a BS in Journalism and Mass Communication. My greatest experience was as copy editor of my student paper, where I did full-page layout of the State-and-Nation wire news section to our paper's style standards, collected the weather forecast (which I cribbed from the regional newspaper's front page by calling a friend who worked in a gas station) and read every dang word in the paper. I got this position by copy-editing a copy of one week's front page, where I not only found the errors they introduced to test me, but also errors that made it into print that week. The biggest lessons I learned were that I was really good at finding miniscule errors in large blocks of text, I was pretty good and making an attractive and readable layout if I knew what sort of look we were shooting for, and if you're really physically and mentally exhausted with more work left to do, fruit juice is better than soda.

Also, I learned that when people say "If everyone from Dan Rather to the guy who writes obit for the local fish-wrap were to die tomorrow, there would not be enough positions opened up to employ all the people who graduate with journalism degrees this year", that's not just a punchline, that's a suggestion that you change majors as soon as this conversation ends.

After not finding work in journalism, I went back to school, where I received a BS in Computer Science, and worked for the university as a web developer. As with xkcd, my time with Perl has been much more useful in my post-collegiate career than the courses I took.

Also, the things I learned as a j-school student -- finding small errors in large text blocks, making text blocks readable and attractive, and handling exhaustion -- are incredibly useful for CS students and web geeks, too.

During that time, I found that what I loved to do was converting things to other things. If you sent this email address a message with this string in the subject and a URL in the body, it responded with that URL's web page as the body. If you went to a certain web page, you could send an anonymous email. I fell in love early with RSS and wrote many things that read it and many other things that wrote it. I wrote a thing for my home page that displayed one guitar if I had new mail waiting, and another guitar if I didn't. I once helped write a tool that scrolled RSS headlines across the top of a web page. My goal and hope was to be a developer who turned things into other things, preferably with web technologies on a Unix/Linux platform while contributing to Open Source projects, in an organization whose primary work is creating software.

A thing I didn't really learn is that, in the last year of your college career, your primary goal is finding something to do with your life after graduation. Preferably, something where you are paid. Successfully completing your courses and graduating is necessary but secondary. So, I found myself as a VMS admin and occasional Microsoft-focused web developer for a medical clinic. I often made things out of other things: I recall parsing the four-digit long-distance records by long-distance code and sending a list of calls to the user of record for each code. It was okay, but not in line with my desired workplace as above.

After that, I came to work at the university again, for a research lab. We do gene sequencing; I do full-stack web development. I did some of the stuff I like to do: I turned web forms into database updates. I turned database tables into web tables. I turned CSV into plots with R. I used Perl and Linux and Unix and eventually R. I coded  daily.

For a while, I worked through a temp service with a defense contractor. Mostly I maintained a lab. On occasion, I set up specialty PCs. I used a visual pre-processor that eventually made C code, which wasn't fun. The pay was somewhat better, but of the things in the goals-and-hopes bit above, I did nothing.

So, I came back to the lab again. I gained more responsibility, and continue to make things from other things. I turn database dumps into XML-filled ZIP files that our instruments use to handle the sequences we give them. I used Sikuli and Jython to script a Windows application to turn a bunch of XML files that held UUencoded BLOBs into searchable XML files. I turned database dumps into JSON, and turned JSON into web page tables and Javascript-created plots. I write libraries that make it easy turn things on various machines into messages on my Linux box, on my Windows box, on my phone.

My one-true-language is Perl. Most everything I write, I first try in Perl, and only go away from it if I can't make it work there. I code in JavaScript: Perl doesn't run on the web browser, so I have to. I'm trying Node.js, and am slowly finding my way toward usefulness. I'm writing more and more R, because it's the shortcut for making plots.

I dislike Python. On first hearing about it, I thought, "What's the point? It sits in the same niche as Perl, but isn't Perl. Why use it?" My first experience with it was some code which displayed available machines in an on-campus computer lab. It has been handed to me as "this works", but it was indented with tabs, and somewhere along the line, a space had been inserted before a tab, so it didn't work. I get readable code, and my journalism degree forced me to appreciate whitespace for readability, but here something I couldn't see ruined my day. My Sikuli project was written with Jython, the Java implementation of Python, because that's the only choice, and my FitBit Tools are in Python because I couldn't easily get OAuth working with Perl. I could see using it more, but I write Perl in a Perl shop right now.

The Greyjoys of the Iron Islands Do Not Sow; I Do Not Make Web Pages. I make tools. I make things that turn things into other things. This can be web, but it will be dynamic, either at the server side or the client side. If you want a web page -- something static, a billboard for the web -- you will be happier and I will be happier if someone not me made this page. For design, I can get you 50-75% of the way to an attractive and useful web tool, and probably more if given a standard to align to, but design is not where my strengths lie and are not where my interests lie.

This is me. This is the tools I like to use, the tasks I like to complete, the environment I like to be in. Right now, I am a developer, working with web technologies in a Unix/Linux environment, doing more but not enough to contribute to Open Source projects. I'm part of an organization that's (writ large) education and/or (smaller) assisting biological research. This means I'm not quite where I want to be, but better than I was for many years. So, I'm looking, but not looking too hard.
Posted by Dave Jacob at 11:52:00 AM